How do you set marks?

From: Morris Metcalf
TO the VRC ForumModel Tugboats is a nice way set marks.

I'd like to know how clubs are setting marks.  We have a club member who has a 42 inch (or so) tug. I'd love to use it to help set marks. It seems much of a more "pure" way to set marks and it gives a chance for the sailing purist to accept a "powerboater" into our fold. I'm still trying to invision how to pull this off so any help or HINTS would be nice. Some methods may get involved. But I think it would be great to share your Ideas.I think it would be nice to know how different clubs accomplish setting up their courses.
Does your club do things different for a club race vs. an AMYA regatta?

Right now we either throw the marks are use an inflatable dingy with paddles. We have gone to a lot of windward-leeward courses, so most most of the time we can throw the marks and it works just great. However, there are those times when throwing will just not set a good windward mark. For bigger events, we use an inflatable dingy which we paddle to set the marks.  This works great and we can use it to also retrieve runaways boats. When the dingy is in use, we usually set a more complicated course, but most of our sailors seem to prefer some type of windward-leeward to the parade of adding a triangle. We also have worked with gates, which does add to the mix.

We are in the process of building a mark boat to be used to set the marks on days when the wind is not too strong. Now, the nature of the marks used comes into play. We have used a Taylor mooring buoy for marks and find it works just great. We have developed an anchoring system the makes the mark almost impossible to snag when rounding. We are planning to tow the marks or build a barge to set them on. When the proper location is reached, we have will have a servo operated latch that will be released and the anchor weight pulled from the barge. We attach a retrieve line to the weight so that all we have to do to get the marks in is to reel them.

Well, that is the short version. If you would like more info, let me know.

From: "Robert E. Mersereau" spfewksp@mindspring.com
Subject: Re: AMYA: Setting MarksHello List!
Piedmont Model Yacht Club's Frank Angel has developed an effective method of setting marks. He has a 36 inch (or so) R/C PT109 model which he has decked over with an aircraft carrier style flat deck with two fore-and-aft rails on which the mark to be set is placed, top forward. To the lower end of the mark is attached an anchor line of appropriate length and anchor weight, which, in turn, is attached a retrieving line. The anchor line and anchor weight are faked on deck so as to run freely when the retrieving line is tensioned. The retrieving line is mono-filament fishing line, again, of appropriate length to reach the shore, and is stored on a "spool" (more about the spool later.) When set, an additional bottoming weight is slideable attached to the retrieving line from the shore, to carry it to the pond bottom so as not to be an obstruction.
At the shoreline, the R/C launch boat is loaded by sailor #1,and the retrieving line is partially unspooled by sailor #2. Sailor #3 directs the boat to the setting location while #1 and #2 keep the retrieving line from tensioning. At the desired spot, #1 tensions the line, and #2 takes out the slack, fastens the spool to the shore, and clips on the bottoming weight. Meanwhile, #3 brings the launch boat back to shore to be loaded for the next mark to be set.....
Retrieving the marks is just a matter of spooling in the retrieving line (hoping NOT to snag an underwater obstruction!) and unclipping the bottoming weight.
The "spool" is made of plywood and dowels. Starting with (approx.) 1/2" x 4" x 7" plywood, an arc is cut in each of the short sides, and a dowel (1/4" ±) is set into each of the long sides at opposite ends, projecting perpendicularly about four inches. (Carefully smooth the ends.) The retrieving line is then wound (or unwound) onto the "spool" by holding a dowel in each hand and winding. Unwinding is simplified by capturing the ends of the dowels between palms, and letting the spool spin as someone tensions the line.
Bob Mersereau
AMYA # 4547
Piedmont Model Yacht Club (#100)
Sailing EC-12 #1389 at Elon College, NC

From: Ralph Kelley rskelley@fastlane.net
Subject: AMYA: Setting marksWith the RC tug, one could consider having the tug set the marks. One way to do this is to have your marks fitted with a ring under it. Run a heavy sinker and line through the ring and put the sinker on the tug and hold onto the string while the tug goes to the spot where you want the mark. When the tug is is positioned, pull on the string and pull the lead sinker off the boat and then release the string. After the sinker is on the bottom, tighten the string and tie it off.
When you want to retrieve the mark, just pull on the string and pull both the mark and the sinker back to shore.
You can also do this with many racing models -- just put the sinker on the stern, away from the backstay.
Ralph Kelley

From: David Goebel
Subject: AMYA: Setting marksI've made my own buoys out of pool floats and galvanized pipe and pipe caps.  Using a pool rope float I purchased 18" long galvanized pipe (pre-threaded, both ends) that just fits in the pool float center hole.  I used the end caps for that same pipe which keeps the pipe from slipping out of the pool float.   In one end cap I drilled a small hole for a threaded eyebolt to pass thru and fastened the eye bolt to the cap with the appropriate nut and lock nut.  From this eye bolt I run regular old  heavy duty kite line to a home made spool.  I run that line thru a large split ring that I've attached four 4oz sinkers to.  Here's a crude drawing. 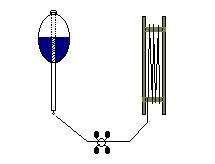 I pay out all the line on the shore sliding the sinkers on the ring up to the eye bolt on the buoy, wind up and toss it out.  Be Sure to keep the spool end of the line secured to something on the shore....The sinkers travel with the buoy until they hit the water and the sinkers sink to the bottom.  I reel in the excess line and the buoy is suspended above the sinkers.  Here's another crude drawing. 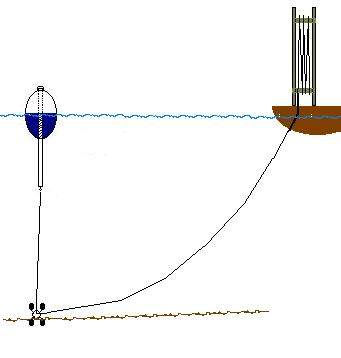 From: Pete Maxson PFM94@aol.com PFM94@aol.com
Subject: AMYA: Setting marks
​We are very fortunate in that our wind is 88+% from west sw and the rest from east ne. There are no trees near and app 1/2 mile fetch, so permanent marks are set. We purchased orange slalom buoys from Overtons ( 6 for about $15) and set them out in a big wide u shape. The start finish is in the center of the u. Our club likes to vary the courses from race to race, so this allows us a lot of freedom.
Pete Maxson
RAMYA Rochester, NY