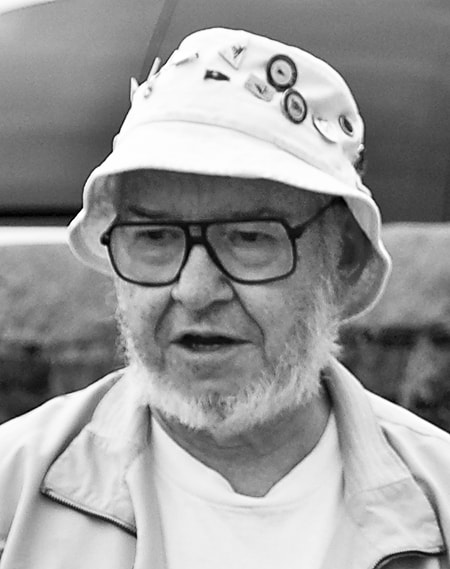 ​Earl Boebert
Earl Boebert was a founder of the Duke City MYC and has been a driving force in model yacht racing in Albuquerque, New Mexico. Also, he led in the establishment of the AMYA-sanctioned RG65 Class. In addition, Earl is a founding member and the Historian of the US Vintage Model Yacht Group (VMYG) from its inception in 1994, and in 1995 was instrumental in having it adopted as the AMYA’s only Special Interest Group.

Most significantly, Earl has been the Editor and Publisher of The Model Yacht, the publication of the US VMYG, delivered thrice annually since the spring of 1997. This 20–24 page newsletter is a treasure trove of vintage model yachting information and an invaluable resource for historical model yacht knowledge, loaded with illustrations and photos, detailing freesailing era designs and methods, and related technology. Earl’s publication of this newsletter alone is enough to warrant his induction into the AMYA Hall of Fame, but he has done so much more.
​
Earl has made it a priority to reach out to our full-size yachting brethren through formal model yachting-related presentations of original historical/technical papers at American yachting symposiums. These have further educated others on the many key aspects of our sport and its contributions to yacht design in general. This has included the 1930s freesailing (vane-steered) models of Captain Nat Herreshoff (of 1890s to 1920s America’s Cup racing fame) as well as the 1983 12-Meter America’s Cup winner Australia II’s breakthrough winged keel, which designer Ben Lexcen had first tested on a radio-controlled Australian 10-Rater Class model.

Further, Earl has assisted President John Snow in compiling US VMYG membership records for past 20 years and the development of formal display concepts and narratives for VMYG-sponsored exhibits at leading yachting-maritime museums. One truly special effort was the 2004 special exhibit, “The World of Model Yachts”, at the Museum of Yachting in Newport, Rhode Island, from May 15 to October 31. It was then the largest exhibit (65 boats) to document our sport, going back to 1854. Another key example was the 2008 Herreshoff Marine Museum Gallery exhibit, working with the Museum’s curator and Halsey Herreshoff, in the promotion of an AMYA J Class Region 1 Championship Regatta, in Bristol, Rhode Island. Also, Earl proactively supported the US VMYG’s initiative to establish the “American Model Yachting Collection” archives at the Mystic Seaport Museum Library in about 2003.

Due to the lasting and unique legacy Earl has created for future modelers, the expansive scope of his model yachting endeavors can surely be recognized as worthy of the AMYA Hall of Fame. This is the rich, archival resource of reference material available as well as the associated scope of interest generated from copies of the US VMYG’s The Model Yacht newsletter and its website (themodelyacht.com). As an example, The Model Yacht helped to give rise to the curiosity of members who attend the wooden pond-yacht building courses taught annually (since 1998) by US VMYG member Thom McLaughlin at WoodenBoat School in Brooklin, Maine.